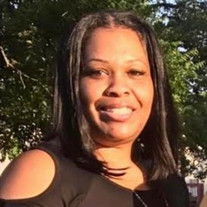 Pamela Denise King-Pinkston, was born April 25, 1976 in Nashville, TN. She was the oldest of three children born to Mattie S. King-Barr. Pam was affectionately known as “Nana,” and received her education in the Nashville Public School system. After completion she attended Tennessee Technology Center at Nashville, where she graduated with her Pharmacy Technician Diploma. Shortly after she went on to become certified. Pam professed a belief in Christ at an early age, at New Hope Missionary Baptist Church in Nashville, TN. Over the years she became a member of Mount Zion Baptist Church. While a member there she faithfully attended various church functions. After a few years of dating, in 2004 Dearick Dewayne Pinkston and Pamela Denise King were joined in holy matrimony. To this union, one child was born Ke’Chelle Lashon Pinkston. She later became a grandmother to Cairo Xander Lewis, whom she loved dearly. Pam made her career in the medical field serving in numerous supervisory roles. For more than two decades she was employed by HCA Corporate across multiple departments but worked the last ten years in the I.T. department with a concentration in pharmacy. That is where she remained until her transition. As a child Pam was always so full of life, happy, and cheerful. She was so passionate and most of all she loved to dance. She touched so many lives with her sweet spirit and warm smile. She had a heart of gold and would give you her last as well as help in any way she could. She was well-liked and loved by her family, friends, and associates; she will be sadly missed by all those whose hearts she has touched. She is preceded in death by her cousin, Larry E. King; her mother-in-law, Sarah Pinkston; and her grandfather, George W. King Jr. Cherishing and loving Pam are her husband, Dearick D. Pinkston; daughter, Ke’Chelle L. Pinkston; grandson, Cairo X. Lewis; mother, Mattie S. King-Barr (Maurice Barr); sister, Brittany M. Moore; brother, Mitchell E. Moore Jr.; devoted grandparents, George W. King Jr. (deceased) Beulah O. King; and a host of other relatives and friends. Memorial Service will be held at one o' clock in the afternoon on Saturday, May 15, 2021 with Visitation one hour prior at New Hope Missionary Baptist Churh, 1303 Hawkins Street, Nashville, TN 37204, Rev. James Turner II, Pastor.

Pamela Denise King-Pinkston, was born April 25, 1976 in Nashville, TN. She was the oldest of three children born to Mattie S. King-Barr. Pam was affectionately known as &#8220;Nana,&#8221; and received her education in the Nashville Public... View Obituary & Service Information

The family of Pamela Denise Pinkston created this Life Tributes page to make it easy to share your memories.

Send flowers to the Pinkston family.