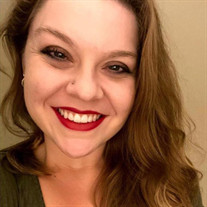 Miss Morgan Priscilla Graves showed the respect of being a friend towards everyone she met during her brief life. Morgan had an outgoing personality, a kind, generous spirit, a great sense of humor, and a boisterous laugh. The lovely, lasting impression that Morgan made on her dearest family and friends will live on in their cherished memories of her. On August 9, 1994, Morgan was born to mother Ginger (Griffin) Graves and father Gary Brennan Graves. She grew up in Franklin, Kentucky. A tragic vehicle accident abruptly ended this earthly life for Morgan on March 6, 2021. Morgan was a lively, delightful child and established many lifelong friendships with classmates. She was a Girl Scout, played softball in the community league, played on the high school volleyball team, and attended Calvary Baptist Church. Morgan learned to play piano and enjoyed singing in the school chorus and church choirs. As a school student, Morgan received honors as a Good Citizen and accepted various leadership roles. Morgan participated in high school theater and chorus performances and Franklin Simpson Community Arts theater productions. She also received a nomination to the Honorable Order of Kentucky Colonels. After high school graduation Morgan continued her education at Berea College in Berea, Kentucky. Here she perfected her singing voice as a member of the Berea College Concert Choir and Chamber Singers. Her acting talent led her to pursue training and education in the Theater Department. Morgan appeared in multiple campus stage performances and musicals. The experience at Berea College helped Morgan mature into a confident young woman and gave her opportunities for an internship and stage performance at Venice Theater in Florida. Vivaciousness combined with musical training and a Theater degree led Morgan to entertain several audiences who had the good fortune of seeing her sing and act live on stage. Some notable performances include her starring role of Mama Rose in Gypsy and the tap-dancing Miss Shields in A Christmas Story: the Musical. Morgan filled dual character roles in a production of Peter Pan. She authentically portrayed the affectionate Mrs. Darling, as well as the zany first mate Mr. Smee which highlighted her natural, comedic timing. And in 2018, Morgan performed as Flora in 27 Wagons of Cotton and earned the title of Best Supporting Actress at the Florida Theatre Conference. Most recently, Morgan began her ascent in a new career. She discovered satisfying work in direct retail sales and customer service. Once again, her talent for impromptu and engaging conversation made this type of job easy for Morgan. Her plans included gaining the necessary experience in sales and operations to manage a business. An ultimate goal was to become a Chief Executive Officer of a large corporation. All who had the benefit of knowing Morgan can imagine she would have fervently reached that pinnacle. Morgan is preceded in death by her grandfather, Eugene Maurice Griffin, III. Surviving close family members to Morgan include her parents Ginger Graves and Brennan Graves, her younger sister Melina Rhiann Graves, her favorite dog Scout, grandparents Judy and Gary Graves, uncle Gene Griffin and aunt Sherry Griffin and her grandmother Linda Brown. Other close family survivors include Julie and Nickey Traughber, Brenda and Russell Forshee, Lindsey and Maverick Brown, Eli Traughber, Shelley, and Jim Buckner, Bailey Buckner, Blake Buckner, Judy, and Alton Goodwin, and Sharon Goodwin. Additional aunts, uncles, and cousins, too numerous to list, will also mourn the sudden loss of their dear family member. Morgan had a deep gratitude for the debt-free, high-quality education and experience she received from Berea College. In lieu of flowers or collectibles, the family asks that donations in memory of Morgan go to Berea College. You may specify your support towards the Concert Choir or Theater Department. Donate to Berea College Morgan will rest in peace in a natural burial site in Larkspur Conservation in Middle Tennessee. The graveside service and burial will be held on Sunday, March 21, 2021 at Larkspur Conservation at Taylor Hollow, 155 Bear Carr Road, Westmoreland, TN. Hiking attire welcomed. Memorial contributions may also be made to Larkspur Conservation. Donations will support planting native trees in memory of the authentic, fun, and loving spirit who once graced the earth, Miss Morgan Priscilla Graves. Memorial Contributions — Larkspur Conservation: Tennessee's Conservation and Natural Burial

Miss Morgan Priscilla Graves showed the respect of being a friend towards everyone she met during her brief life. Morgan had an outgoing personality, a kind, generous spirit, a great sense of humor, and a boisterous laugh. The lovely, lasting... View Obituary & Service Information

The family of Morgan Priscilla Graves created this Life Tributes page to make it easy to share your memories.

Miss Morgan Priscilla Graves showed the respect of being a friend...

Send flowers to the Graves family.