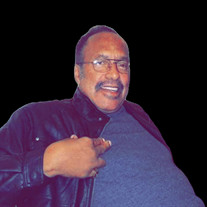 Herbert T. Bent was born on June 21, 1947 to the late Bishop Gerald and late Juanita Bent in Wauwatosa, Wisconsin. Herbert was educated in the Gillett, Wisconsin school system. He was on the varsity team as a star player. He was so good at basketball that the Harlem Globetrotters wanted him to play for them. He enlisted in the United States Army in 1966 until 1968. During these times he received medals for National Defense Service, Vietnam Services, Vietnamese Campaign, One Overseas Service Bar, Purple Heart and the Sharpshooter Badge M-14. During the course of his life he developed a strong work ethic. He also earned some college credit that led him to positions in case management, a counselor, as well as working as a Federal conviction officer for nearly 20 years. He was also a dedicated worker for the United States Postal Service for 7 years until he retired in April 2014. Herbert's hobbies included shooting pool, bowling, and fishing. He also loved collecting and restoring old antique cars. In September of 2012, Herbert was united in Holy matrimony to Lydia L. McNair, they were together for 15 years. During this time a son was born, Marcus and Herbert also raised one son as his own, Derrick. God allowed us to have him for 73 years, but called him home to join his father, Bishop W.F. Bent; his mother, Juanita Bent, and two brothers, Edward and Clement Bent on October 10, 2020. He leaves to cherish his memory, a devoted wife, Lydia L. Bent, daughters, Lena Bent (Darryl) Fergerson and Sandra Ahsan of Milwaukee, WI; 2 sons, Thomas Bent of Milwaukee, WI and Marcus Bent of Nashville, TN; 2 step-sons, Derrick McNair and Bernard King Jr. of Nashville, TN; 4 sisters, Alice (George) Ramos of Houston, TX, Margaret Burrell, Barbara (John) Surges, and Eunice Bent all of Milwaukee, WI; 4 brothers, Clifford (Alura) Bent of Milwaukee, WI, Kenneth (Lisa) Bent, Jerry Bent and Tracey Bent all of Madison, WI; 9 grandchildren, Mary Moncrief, Wayne Scott, Jr, Devan Bent, Juwan Laster, Jimmie Bent, Daylion Apkarian, Madison Jones, Disnee McNair, and Ke’Aslyn Cole; 4 great grandchildren, Jimia, Janiya and Oshad Bent, and Nesha Martin; and a host of other relatives and friends. A Celebration of Life will be held at Noon on Saturday, October 24, 2020, at Mt. Pisgah UMC, 6245 Mt. Pisgah Rd., with Visitation one hour prior. Interment Middle Tennessee Veterans Cemetery.

Herbert T. Bent was born on June 21, 1947 to the late Bishop Gerald and late Juanita Bent in Wauwatosa, Wisconsin. Herbert was educated in the Gillett, Wisconsin school system. He was on the varsity team as a star player. He was so good at... View Obituary & Service Information

The family of Herbert T. Bent created this Life Tributes page to make it easy to share your memories.

Send flowers to the Bent family.