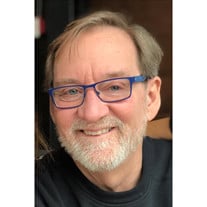 It’s been over a year since Dan passed away and we are glad to have the opportunity to come together to honor and celebrate his life, he lived a life worth celebrating. Dan was born on April 29, 1955 to the late Frank and Rita (Hughes) Beluk of Stamford, Connecticut. Raised in Stamford, Dan was the middle child growing up with older brother George and younger brother Paul. He was always active in giving back to the community and was a volunteer firefighter and Eagle Boy Scout. He left Stamford in High School to join the “World Famous Traveling Cast” of Up With People. During his 4 years with Up With People, he was promoted to First Dance Captain and choreographed major events including an athletes-only show at the Munich Olympics and the Super Bowl X Halftime Show. His global adventures were rooted in creating positive change and uniting people through music. These experiences contributed to the values and work ethic which would propel him through the rest of his life. After Up With People, Dan navigated his way to Tucson, Arizona where he juggled many jobs including Speech Pathologist, EMT, and Embalmer at a local Funeral Home all while earning college credit. After successfully completing his undergraduate degree he began Medical School at the University of Arizona in 1982, where he met his beloved wife Susan (Cord). They graduated and got married on the same weekend. Soon after they moved to begin their life and medical training in Boston. Dan completed his Internal Medicine residency at the Faulkner Hospital and his Gastroenterology Fellowship through St. Elizabeth’s Hospital. He built his career on integrity and kindness, working with a unique combination of intelligence, skill, compassion, and humor that continues to be recognized by former staff and patients. Dan dedicated his career to practicing medicine for over 30 years primarily in the Lowell and Chelmsford areas of Massachusetts. He and his wife settled in the charming coastal city of Newburyport where they established many friendships, started their family and raised three children, Christine, Mark, and Molly. A proud member of the (unofficial) Newburyport Ski Team, Dan loved spending time with his friends skiing in the winters and hanging out on the river at Michael's Harborside in the summer. Dan was an incredible chef, active in his community, an avid reader and a lover of art and music. He brought his quick wit and sense of humor with him everywhere he went. His favorite holiday was Thanksgiving and he spent countless hours researching recipes to craft spectacular feasts bringing together family and friends. Daniel F. Beluk, 64, passed away peacefully on March 8, 2020 surrounded by his immediate family at Vanderbilt Hospital in Nashville, Tennessee due to complications with lung cancer. He is survived by: wife Susan Beluk, M.D. and their three children Christine, Mark and Molly Beluk; his older brother George and wife Nancy Beluk of Pittsburgh, PA and their children Andrew and Daniel Beluk; along with his younger brother Paul and wife Annie Beluk of Norwalk, CT and their children Ryan, Brenna and Meghan Beluk. Arrangements: All are welcome to join Daniel F. Beluk's Memorial Service: A Celebration of Life Saturday, September 25, 2021 at 10:00AM at the Central Congregational Church in Newburyport, Massachusetts. More information on the service, how to stream the event, and the Daniel F. Beluk Memorial Fund can be found on this website: https://bit.ly/DFBMemorial.

It&#8217;s been over a year since Dan passed away and we are glad to have the opportunity to come together to honor and celebrate his life, he lived a life worth celebrating. Dan was born on April 29, 1955 to the late Frank and Rita (Hughes)... View Obituary & Service Information

The family of Daniel F. Beluk M.D. created this Life Tributes page to make it easy to share your memories.

It’s been over a year since Dan passed away and we are glad to...

Send flowers to the Beluk family.