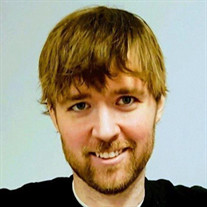 Conor was born February 16, 1985 in Memphis, Tennessee to his loving parents, Daniel and Annette (nee Jenkins) Hayden and passed away on May 5th after a number of years courageously battling serious health issues. He spent his younger days in Memphis attending Holy Rosary parochial school there before moving to Nashville at the age of ten with his parents and sister Deirdre. He graduated from Father Ryan High School in the Class of 2003. He attended the College of Charleston to study Business Administration but returned to Nashville to take up the culinary sciences. His love for the commercial kitchen was developed while working at Richland Country Club nights, weekends and summers during his school days and beyond. Eventually he completed his studies in a field of his true aptitude, computer sciences, completing multiple CISCO certifications including high marks for the coveted CCNA. Subsequent to certification, Conor began a career in information technology and attained his career goal of promotion to a network risk management role shortly before his last physical setback. From a young age Conor was notable for his sense of wonder and general enthusiasm. He had a great love for animals and deep empathy for those in need or requiring a leg up in life. He was not afraid to put himself out there to support friends, acquaintances and anyone suffering. He could also be very competitive as anyone who sat across the table from him at a card game could attest. He was a great fan on the band Phish and attended many concerts around the country including memorable events in San Francisco, Madison Square Garden and Fenway Park. He had dear friends that were also Phish followers and many Phish fans that became good friends. He had a passion for the University of Notre Dame Fighting Irish football team which he inherited from his parents who attended college there and at St. Mary’s. He was never happier than when he was in the stadium. Conor was able to travel extensively in the time he had, especially to visit relatives in California and the east coast from Pennsylvania to Maine. He also visited Ireland, the UK and France. He felt an obligation to give back to the community of people that suffered like him with debilitating illness. He participated in and helped moderate social networking sites set-up to provide information and encouragement. Those people counted Conor as a significant piece of their support network and will also feel his absence. Conor was a great comfort to his family whom he loved deeply, and he made every effort to keep up with extended family near and far from coast to coast. He was predeceased by all of his grandparents and his dear aunt Debbie Russell. He is survived by his parents and his sister Deirdre Fuerst, brother-in-law Hank and their children Liam and Hollis of Franklin, TN. He is also survived by many aunts and uncles, including his Godfather Rob Hayden of Memphis, their families and a large number of cousins, all of whom he cherished. And of course, Atticus the boxer who was his soul mate. He will be missed by all. A celebration of his life will be held at The Lodge at Camp Marymount, 1318 Fairview Boulevard, Fairview, TN on Saturday May 22nd. The event begins at 10:30 am with a ceremony at 11:00 followed by a reception. In lieu of flowers, please make a donation in Conor’s memory to Mission Cure, a pancreatitis charity, at their website (https://mission-cure.org/donate/) or Fr. Ryan High School, 700 Norwood Dr, Nashville, TN 37204.

Conor was born February 16, 1985 in Memphis, Tennessee to his loving parents, Daniel and Annette (nee Jenkins) Hayden and passed away on May 5th after a number of years courageously battling serious health issues. He spent his younger days in... View Obituary & Service Information

The family of Conor Cody Hayden created this Life Tributes page to make it easy to share your memories.

Send flowers to the Hayden family.